Mark 11:23 (NKJV)  For assuredly, I say to you, whoever says to this mountain, ‘Be removed and be cast into the sea,’ and does not doubt in his heart, but believes that those things he says will be done, he will have whatever he says.

There are some things we are going to declare that will happen in our Bible Study:

Pray these prayers for yourself and your born again friends and loved ones:

17  [For I always pray to] the God of our Lord Jesus Christ, the Father of glory, that He may grant you a spirit of wisdom and revelation [of insight into mysteries and secrets] in the [deep and intimate] knowledge of Him,

18  By having the eyes of your heart flooded with light, so that you can know and understand the hope to which He has called you, and how rich is His glorious inheritance in the saints (His set-apart ones),

19  And [so that you can know and understand] what is the immeasurable and unlimited and surpassing greatness of His power in and for us who believe, as demonstrated in the working of His mighty strength,

20  Which He exerted in Christ when He raised Him from the dead and seated Him at His [own] right hand in the heavenly [places],

14  For this reason [seeing the greatness of this plan by which you are built together in Christ], I bow my knees before the Father of our Lord Jesus Christ,

15  For Whom every family in heaven and on earth is named [that Father from Whom all fatherhood takes its title and derives its name].

16  May He grant you out of the rich treasury of His glory to be strengthened and reinforced with mighty power in the inner man by the [Holy] Spirit [Himself indwelling your innermost being and personality].

17  May Christ through your faith [actually] dwell (settle down, abide, make His permanent home) in your hearts! May you be rooted deep in love and founded securely on love,

18  That you may have the power and be strong to apprehend and grasp with all the saints [God’s devoted people, the experience of that love] what is the breadth and length and height and depth [of it];

19  [That you may really come] to know [practically, through experience for yourselves] the love of Christ, which far surpasses mere knowledge [without experience]; that you may be filled [through all your being] unto all the fullness of God [may have the richest measure of the divine Presence, and become a body wholly filled and flooded with God Himself]!

9  For this reason we also, from the day we heard of it, have not ceased to pray and make [special] request for you, [asking] that you may be filled with the full (deep and clear) knowledge of His will in all spiritual wisdom [in comprehensive insight into the ways and purposes of God] and in understanding and discernment of spiritual things–

10  That you may walk (live and conduct yourselves) in a manner worthy of the Lord, fully pleasing to Him and desiring to please Him in all things, bearing fruit in every good work and steadily growing and increasing in and by the knowledge of God [with fuller, deeper, and clearer insight, acquaintance, and recognition].

We need to receive these things by faith, not based on how we feel or what we see.

The Fundamentals of Faith

Very Important!!! – Approach these things like you have never heard them before with an open and receptive heart and God will cause them to become as fresh and new to you as the first time you heard them.

Whenever we watch the Super Bowl, Wimbledon, the World Series, The Masters Golf Tournament, what are we seeing?

We are seeing people who have mastered the fundamentals of that sport.

They have spent so much time practicing and doing over and over again, they have become so proficient at the fundamentals of the sport. Then when there is any error or shortcoming, they study, study, study.

Vince Lombardi on the Hidden Power of Mastering the Fundamentals

It was July of 1961 and the 38 members of the Green Bay Packers football team were gathered together for the first day of training camp. The previous season had ended with a heartbreaking defeat when the Packers squandered a lead late in the 4th quarter and lost the NFL Championship to the Philadelphia Eagles.

The Green Bay players had been thinking about this brutal loss for the entire off-season and now, finally, training camp had arrived and it was time to get to work. The players were eager to advance their game to the next level and start working on the details that would help them win a championship.

Their coach, Vince Lombardi, had a different idea.

In his best-selling book, When Pride Still Mattered: A Life Of Vince Lombardi, author David Maraniss explains what happened when Lombardi walked into training camp in the summer of 1961.

He took nothing for granted. He began a tradition of starting from scratch, assuming that the players were blank slates who carried over no knowledge from the year before… He began with the most elemental statement of all. “Gentlemen,” he said, holding a pigskin in his right hand, “this is a football.”

Lombardi was coaching a group of three dozen professional athletes who, just months prior, had come within minutes of winning the biggest prize their sport could offer. And yet, he started from the very beginning.

Lombardi’s methodical coverage of the fundamentals continued throughout training camp. Each player reviewed how to block and tackle. They opened up the playbook and started from page one. At some point, Max McGee, the Packers’ Pro Bowl wide receiver, joked, “Uh, Coach, could you slow down a little? You’re going too fast for us.” Lombardi reportedly cracked a smile, but continued his obsession with the basics all the same. His team would become the best in the league at the tasks everyone else took for granted. 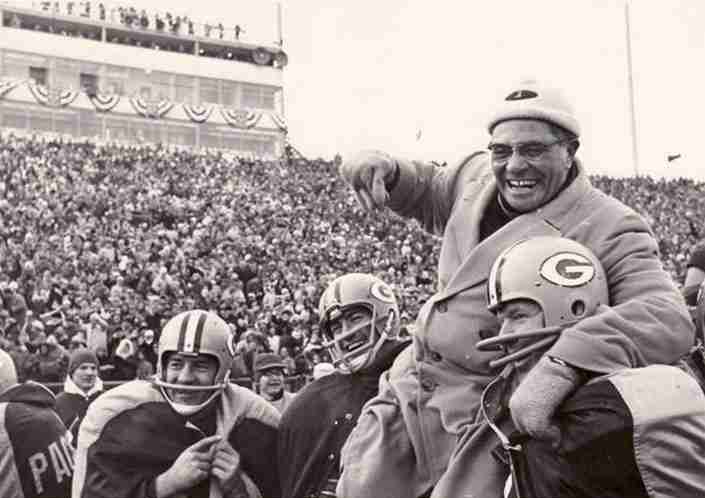 Vince Lombardi is carried off the field by his players after defeating the New York Giants 37-0 to win the 1961 NFL Championship. (Image Source: Green Bay Press-Gazette Archive)

The 1961 season was the beginning of Vince Lombardi’s reign as one of the greatest football coaches of all-time. He would never lose in the playoffs again. In total, Lombardi won five NFL Championships in a span of seven years, including three in a row. He never coached a team with a losing record.

This pattern of focusing on the basics has been a hallmark of many successful coaches. (For example, basketball legends John Wooden and Phil Jackson were known for having a similar obsession with the fundamentals. Wooden even went so far as to teach his players how to put on their socks and tie their shoes.)

However, it is not just football and basketball where this strategy is useful. Throughout our lives, a focus on the fundamentals is what determines our results.

It is so easy to overestimate the importance of one critical event or one “big break” while simultaneously forgetting about the hidden power that small choices, daily habits, and repeated actions can have on our lives. Without the fundamentals, the details are useless. With the fundamentals, tiny gains can add up to something very significant.

Mastery in nearly any endeavor is the result of deeply understanding simple ideas. For most of us, the answer to becoming better leaders, better parents, better lovers, better friends, and better people is consistently practicing the fundamentals, not brilliantly understanding the details.

“This is a football.”

Why do we need to study faith?

6  But without faith it is impossible to please Him, for he who comes to God must believe that He is, and that He is a rewarder of those who diligently seek Him.

17  For in it the righteousness of God is revealed from faith to faith; as it is written, “THE JUST SHALL LIVE BY FAITH.”

11  But that no one is justified by the law in the sight of God is evident, for “THE JUST SHALL LIVE BY FAITH.”

38  NOW THE JUST SHALL LIVE BY FAITH; BUT IF ANYONE DRAWS BACK, MY SOUL HAS NO PLEASURE IN HIM.”

1 NOW FAITH is the assurance (the confirmation, the title deed) of the things [we] hope for, being the proof of things [we] do not see and the conviction of their reality [faith perceiving as real fact what is not revealed to the senses].

Hope is always future tense or pointing to the future. Faith says I’ll receive it now or I have it now.

The principles and laws of God work the same every time and if you can learn them, they will for you every single time.

We must move from the mental agreement realm to believing with the heart in order to receive from God.

How Does Faith Come?

17  So then faith comes by hearing, and hearing by the word of God.

6  But without faith it is impossible to please Him, for he who comes to God must believe that He is, and that He is a rewarder of those who diligently seek Him.

If God demands that I have faith when it is impossible for me to have faith, then He is unjust. But if He places within my hands the means whereby faith can be produced, then the responsibility rests on me whether or not I have faith.

22  So Jesus answered and said to them, “Have faith in God.

23  For assuredly, I say to you, whoever says to this mountain, ‘Be removed and be cast into the sea,’ and does not doubt in his heart, but believes that those things he says will be done, he will have whatever he says.

24  Therefore I say to you, whatever things you ask when you pray, believe that you receive them, and you will have them.

25  “And whenever you stand praying, if you have anything against anyone, forgive him, that your Father in heaven may also forgive you your trespasses.

26  But if you do not forgive, neither will your Father in heaven forgive your trespasses.”

9  that if you confess with your mouth the Lord Jesus and believe in your heart that God has raised Him from the dead, you will be saved.

10  For with the heart one believes unto righteousness, and with the mouth confession is made unto salvation.

This is a spiritual law. You cannot change the law of words that we live under, but you can change the words that determine how you live.

Once you understand a spiritual law, you can operate in it and get the results every time.