A large portion of the content of this sermon series came from the book by Andrew Wommack entitled, “Don’t Limit God – Imagine Yourself Successful”. 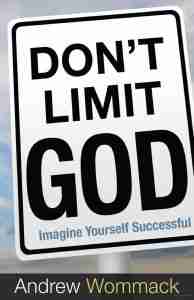 (Psalms 78:41 NKJV) Yes, again and again they tempted God, And limited the Holy One of Israel.

(Psalms 78:41 TPT) Again and again they limited God, preventing him from blessing them. Continually they turned back from him and provoked the Holy One of Israel!

How Do We Limit God?

We have a higher standard to measure ourselves: God’s Word and His plan!

(Mark 4:19 AMPC) (19) Then the cares and anxieties of the world and distractions of the age, and the pleasure and delight and false glamour and deceitfulness of riches, and the craving and passionate desire for other things creep in and choke and suffocate the Word, and it becomes fruitless.

God is going to speak to us in a still small voice. (a hushed whisper) God is speaking to us all the time. But most people’s lifestyles are not conducive to hearing from God.

(Jeremiah 10:23 MSG) I know, GOD, that mere mortals can’t run their own lives, That men and women don’t have what it takes to take charge of life.

Many people fear the unknown because there is risk involved. We fear being uncomfortable.

Is your life the same mundane routine every day?

Don’t be content with doing nothing but surviving and getting by.

We will last longer, be happier, more productive and everything will work better in our lives when we have purpose and are moving towards fulfilling that purpose.

(1 John 4:18 NKJV) There is no fear in love; but perfect love casts out fear, because fear involves torment. But he who fears has not been made perfect in love.

God is never going to do anything to hurt you. He’s always going to do things to help and bless you!

We limit God when we are afraid to step out and do something because we think we might fail.

The biggest failure is when we play it too safe because we are afraid of making a mistake – but we all make mistakes.

If we’re afraid of doing something because we may not do it perfectly, we’ll never get anything done.

It’s actually better to step out and believe God and, if we fail, let God pick us up and dust us off so we can get up and go again.

If you believe that God has put something in your heart, do it! Start moving in that direction. A stalled car is easier to turn once it is in motion than when it is sitting still.

Because we are creatures of habit, we can be afraid to do something different.

Sometimes, we like to keep things the same because we are lazy and comfortable and don’t like the effort that may be required to make the change.

You might be living with a fear of persecution from people and that is holding you back and limiting God.

No one likes being persecuted. If you enjoy people being mad at you, hating you, and saying bad things about you, something is wrong with you.

Settle this – if you are going to do what God has told you to do and become someone who is in a position to influence others, there is going to be persecution. This is why most people prefer to stay in the background and be anonymous.

(Proverbs 29:25 AMPC) The fear of man brings a snare, but whoever leans on, trusts in, and puts his confidence in the Lord is safe and set on high.

(Proverbs 16:18 NLT) Pride goes before destruction, and haughtiness before a fall.

(1 Peter 5:5 NKJV) Likewise you younger people, submit yourselves to your elders. Yes, all of you be submissive to one another, and be clothed with humility, for “GOD RESISTS THE PROUD, BUT GIVES GRACE TO THE HUMBLE.”

Prosperity and success have destroyed a lot of people and especially a lot of ministers. This includes some that I have personally worked for or been around in ministry.

We can see many leaders in the Bible that started well but did not end well because of pride when God started blessing them. (Examples: King Saul, King David, King Uzziah…)

I was afraid of success and what it could do to me, because I did not want to get into pride for what the Lord was doing in our church.

Pride is a very subtle, clever, and cunning! As it turns out, this was pride in that I was trying to do the Lord’s job in protecting me from pride instead of trusting that He would do that. I needed to trust the fact that over many years, He was preparing me for those things.

Because of this, I would not let myself dream or have vision of any of the great things that God wanted to do in our church.

“We see ourselves a certain way, but we have to change that image if we don’t want to limit God. I didn’t know how long it would take to change the image of what I was incapable of doing—a week, a month, a year, or even longer—but I was determined to change it and start seeing myself doing what God told me to do!”