2 Timothy 3:16-17 NKJV  All Scripture is given by inspiration of God, and is profitable for doctrine, for reproof, for correction, for instruction in righteousness,  (17)  that the man of God may be complete, thoroughly equipped for every good work.

It has always been the plan of God for He and His Word to dwell in and among His people.

Revelation 7:9-10, 15 NKJV  After these things I looked, and behold, a great multitude which no one could number, of all nations, tribes, peoples, and tongues, standing before the throne and before the Lamb, clothed with white robes, with palm branches in their hands,  (10)  and crying out with a loud voice, saying, “Salvation belongs to our God who sits on the throne, and to the Lamb!” Therefore they are before the throne of God, and serve Him day and night in His temple. And He who sits on the throne will dwell among them.

Isaiah 55:10-11 NKJV  “For as the rain comes down, and the snow from heaven, And do not return there, But water the earth, And make it bring forth and bud, That it may give seed to the sower And bread to the eater,  (11)  So shall My word be that goes forth from My mouth; It shall not return to Me void, But it shall accomplish what I please, And it shall prosper in the thing for which I sent it.

How We Got Our Bible: Christian History Timeline by Philip W Comfort:

Martin Luther – Born 1483, originally going to be a lawyer, member of the Catholic Church. He rebels against plans of his father and becomes a monk. 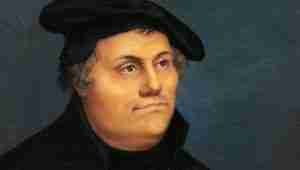 He struggled to understand his own relationship with God and how to obtain purity and right-ness with God. At that time the Catholic Church has a practice of indulgences. This is where you can make a withdrawal on the treasury of merits and graces of saints that have gone before and purchase and receive them for yourself. You could not only purchase these for yourself or your loved ones, you could purchase them for loved ones that have already died and also to cover your sins not yet committed. Luther writes a 95 point thesis on why this is wrong titled, “Disputation on the Power and Efficacy of Indulgences,” also known as “The 95 Theses,” and nails it to the door of the Church at the Whittenburg Castle. This causes Pope Leo to issue a decree labeling Luther a heretic and offering him the opportunity to repent and recant his thesis. He refuses and ends up getting kicked out of the church. In exile, he then translates the New Testament into German. This “rebellion” is what started the Protestant Reformation and eventually the Protestant wing of Christianity.

Dr. Philip W. Comfort is visiting professor of New Testament at Wheaton College and author of The Quest for the Original Text of the New Testament (Baker, 1992).

Copyright © 1994 by the author or Christianity Today

Interesting to note, the Industrial Revolution began in the mid 1700’s, about 100 years after the Bible was translated into languages that ordinary people could understand. From that time until now, technology has exploded and is only accelerating at record speed.

Daniel 12:4 NKJV  “But you, Daniel, shut up the words, and seal the book until the time of the end; many shall run to and fro, and knowledge shall increase.”

Revelation from God’s Word is directly associated with the prosperity of a society as a whole.

Proverbs 29:18 NKJV  Where there is no revelation, the people cast off restraint; But happy is he who keeps the law.

The Soviets, Chinese and other communist or socialist nations copied technologies of other nations because of a lack of creativity because they do not allow the Word of God to flow into their nations.

Languages of the Bible

Most translations are available in several different types of Bible.

Here are just a few of the many different kinds of Bibles.

What are some tools that every student of the Bible should have:

Many of these tools are now available in digital format through Bible software packages or online for free.